Reports that Irukandji jellyfish might be moving south may be panicking people unnecessarily. It’s almost impossible to tell where the tiny jellyfish are along our coast, but that could change with new technology that can “sweep” the ocean for traces of DNA.

Since the Christmas period nearly twice the usual number of people have suffered the excruciating consequences of being stung by Irukandji. The stings are rarely fatal, but can require medical evacuation and hospitalisation.

These reports of southward movement are almost a yearly tradition, often sensational, and accompanied by varying expert opinions about whether climate change is driving these dangerous tropical animals south, towards the lucrative beach tourism destinations of southeast Queensland.

But simply counting the number of Irukandji found, or the number of reported stings, tells us very little about where the species can be found.

A simple question but difficult answer 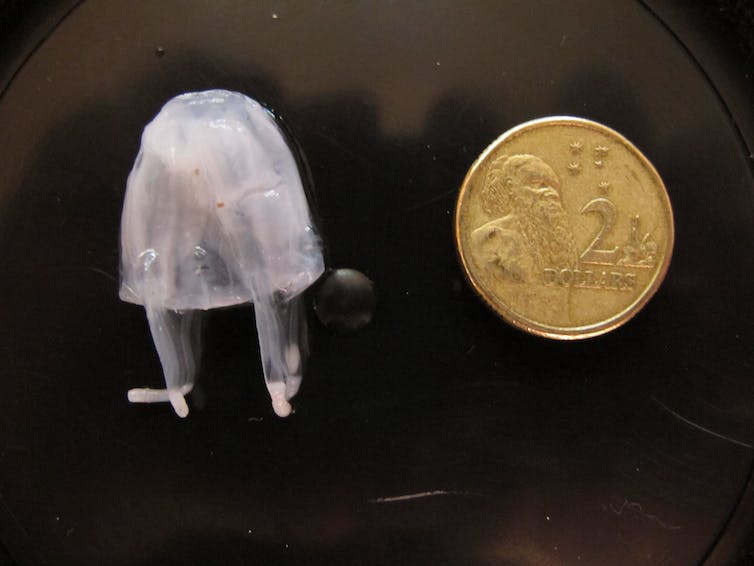 A sense of scale: an Irukandji Jellyfish next to a two dollar coin. Source: WA Department of Parks and Wildlife/AAP

“Where are Irukandji located, and is that changing?”, might seem like a straightforward question. Unfortunately, finding the answer is not easy. The only definitive way to determine where they are is to catch them – but that poses many challenges.

Irukandji are tiny (most are about 1cm in diameter) and transparent. Along beaches they are usually sampled by a person wading through shallow water towing a fine net. This is often done by lifeguards at beaches in northern Queensland to help manage risk.

Irukandji are also attracted to light, so further offshore they can be concentrated by deploying lights over the sides of boats and then scooped up in nets. The problem is they’re are often very sparsely scattered, even in places we know they regularly occur, such as Queensland’s north. As with any rare species, catching them can confirm their presence, but failure to catch them does not guarantee their absence. Collecting Irukandji in an ocean environment is truly like searching for the proverbial needle in a haystack.

Another method is to infer their presence from hospital records and media reports of Irukandji syndrome, the suite of symptoms caused by their sting, but this method has major pitfalls. There is often a delay of around 30 minutes between the initial sting, which is usually mild, and the onset of Irukandji syndrome. Hence the animal that caused the symptoms is almost never caught and we cannot verify the species responsible.

Indeed, we do not know whether Irukandji are the only marine organisms to cause Irukandji syndrome. For example, the Moreton Bay Fire Jelly, a species of jellyfish related to Irukandji only found in southeast Queensland, and even bluebottles, which in the past couple of weeks have stung more than 10,000 people along Australia’s east coast, have also been suggested to occasionally cause Irukandji-like symptoms.

eDNA to save the day

Emerging technology may be the key to properly mapping Irukandji distribution. All animals shed DNA in large quantities into their environment (for example, skin cells and hair by humans). This DNA is called environmental DNA) (or eDNA) and genetic techniques are now so powerful that they can detect even trace amounts.

In the sea, this means we can determine whether an animal has been in an area by collecting water samples and testing them for the presence of the target species’ DNA. This technology is exciting because it provides a major upgrade in our ability to detect rare species. Moreover, it is relatively simple to train people to collect and process water samples, the results can be available within hours, and the equipment needed to analyse the samples is becoming increasingly affordable.

This means an eDNA monitoring program could be easily established in Southeast Queensland to monitor the occurrence and, importantly, changes in the distribution of Irukandji jellyfish. This is because Irukandji leave traces of their genetic code in the water as they swim.

Developing the eDNA technology for use with Irukandji would cost a few hundred thousand dollars – a relatively small price to pay to improve public safety, to provide stakeholders with some control over their ability to detect Irukandji, and to create some certainty around the long-term distribution of these animals.

The authors would like to acknowledge the significant contribution to this article by Professor Mike Kingsford (James Cook University).

This article was originally published in the